Welcome to the website of Farnborough Old Boys Guild Football Club, founded in 1932 and affiliated to the Kent County FA.


We hope you enjoy your visit.

The Sunday Reserves play league rivals Blendon FC in the delayed final of the 2019-20 Kent Sunday Junior Cup at the Gallagher Stadium, home of Maidstone United FC, kick-off 10.30am.

This match is ALL-TICKET. Get your tickets HERE.

On the same day the Colts play the final of the Red Shield against Bruin at Long Lane JFC, kick-off 10.00am.  There is no admission fee for this match.

Please try to get along to one of these games, the boys would love to have your support.

Just two of our teams had fixtures this weekend.

On Saturday Josh Dalsan starred as the Third XI picked up another six points from their home double banker with Russellers. In the first match, won by four goals to two, Josh scored twice, with Gary Harrigan and Joe Chalker also on the scoresheet.

The second game resulted in a 2-0 victory, Josh and Jamie Tulloch hitting the decisive goals.

With two matches to play, it looks like the Thirds will finish seventh in a league of eleven teams, which for most of the season had seemed a very ambitious target.

On Sunday, the Sunday XI went down 2-0 away to Portland.

Thanks to the excellent Film My Match crew, we have a range of match video options for the Kent Intermediate Challenge Shield Final...click for your preference (all options open in a new tab/page): 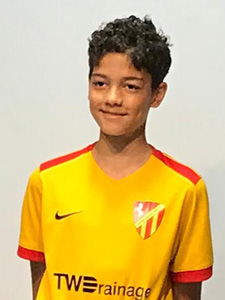 Congratulations to Logan Williams who has sealed a two year contract with Charlton Athletic.

Logan was an ever-present with the Colts last season but an agreement with Charlton meant he could not play regularly this campaign.

We wish him all the best - he is in great hands with The Addicks!

In support of Mike Cole

Sadly, we received the news recently that Saturday and Sunday Reserves captain Mike Cole has been diagnosed with skin cancer.

Everyone at the Guild wishes Mike the strength to make a full recovery. The fight he gives in every match will stand him in good stead in this battle.

Kevin Lott has set up a GoFundMe page to help Mike pay his bills while he is off work. You can read more HERE.

There is a fundraising match and entertainment at Bromley FC on Sunday 4 July: 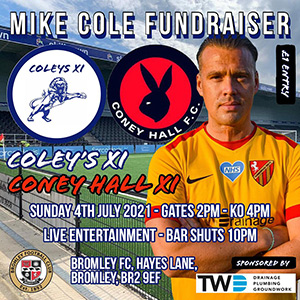 We have a vacancy for Saturday Reserves team manager.
If you wish to apply for the post or require further details please email mailbox@fobgfc.org stating your interest.
Alternatively, club members can contact either Ian Couchman, Danny Saines or Luke Johnson direct.
Once appointed, the chosen candidate will link up with First XI team manager Luke Johnson and assistant Mark Warner for 2021-22 pre-season training and friendlies, in preparation for the new season ahead.

Summer Trials for Under 14 Players

We will be holding summer trials for next season's Colts squad, which will be an Under 14 side next season. 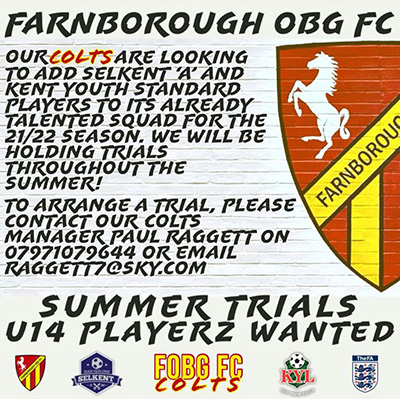 Got an injury or niggle?

Don't forget, we are subscribed to Jon W Sports Injury for all our sports injury needs.

Jon W Sports Injury is a leading sports injury clinic who work with many clubs in the area offering expert injury assessment, treatment and football-based rehabilitation programs for the effective recovery of all sports injuries.

Both therapists have worked and at professional and semi-professional football level. All Guild players receive £5 off every treatment session with them. More information can be seen on their website www.jonwsportsinjury.co.uk but please feel free to contact them to discuss any needs.

Jon W Sports Injury has clinics in The Warren, Hayes and Charterhouse Road, Orpington. They operate flexible working hours to allow for after school/work appointments. They can be contacted at jonwsportsinjury@hotmail.co.uk or on 07825 835305.

We have a dedicated page for COVID-19 as it affects FOBG.

FOBG has held FA Charter Standard Adult Club status for several years now. This is official recognition by the Football Association given to non-league clubs that have demonstrated that they are well run and sustainable. It also recognises the club's commitment to coaching, player and coach development, and the raising of standards of behaviour in the game.
The benefits of having Charter Standard status include:

This represents a major step forward in the development of Farnborough OBG FC and illustrates the ambitions of the club to develop further both on and off the field.

Many thanks to Malcolm Poynter for his hard work in achieving this recognition for the club.